We worked tremendously hard to reimagine this 1920s style former warehouse into a smart and modern workplace – helping to ‘shape the future’ in Archway. From major structural alterations to a complete courtyard makeover, you can read all about our Laszlo project and the challenges we faced below.​ 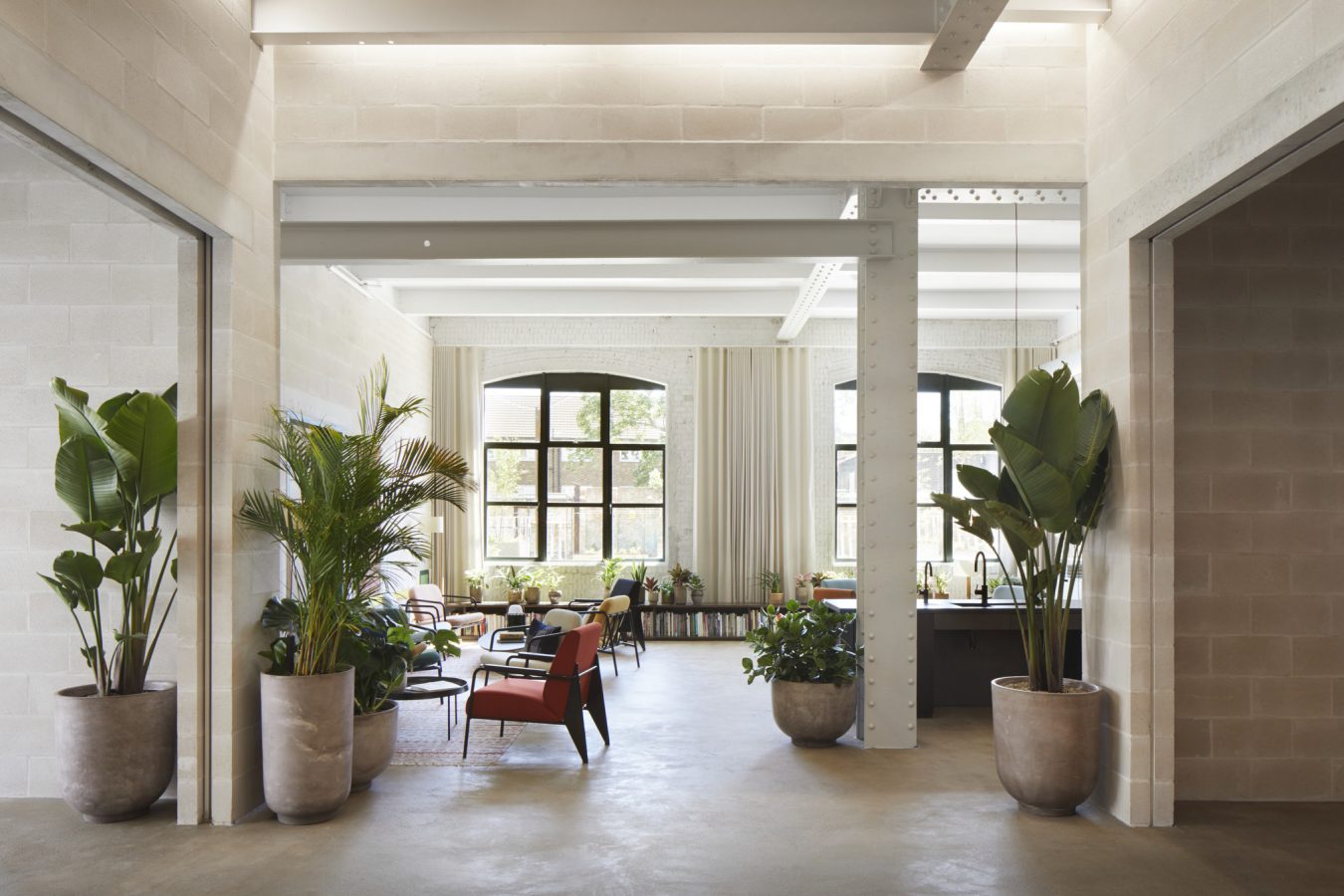 Together we helped 'shape the future' in Archway.”

Back to shell and core ​

Our refurbishment at Laszlo was completed in two phases. The first phase focused on the strip-out of the existing fixtures and fittings, and the demolition of the internal walls on all the floors. We also revealed the original concrete floor and ceilings, exposed brickwork and opened the three upper floor slabs up to the fourth floor to install two new lifts. This process brought the building back to shell and core and created four new open-plan floors.​ To prepare the layout for the washrooms we had to dig into the concrete floor and install the drainage system, and on the lower ground floor, we also had to remove a large amount of asbestos.

The second phase of this refurbishment project completely reimagined the former warehouse.​ ​Because the architects wanted to preserve as much as possible of the 1920s style warehouse features, we focused on sandblasting the original concrete floor, exposing the brick walls on the ground floor, and upcycling the existing timber joist ceiling on the fourth floor. ​​We then combined these features with thoughtful design elements of the electrical and mechanical systems, such as characterful circular-air heating and cooling cassette units, and sensor glass doors in the reception.​ 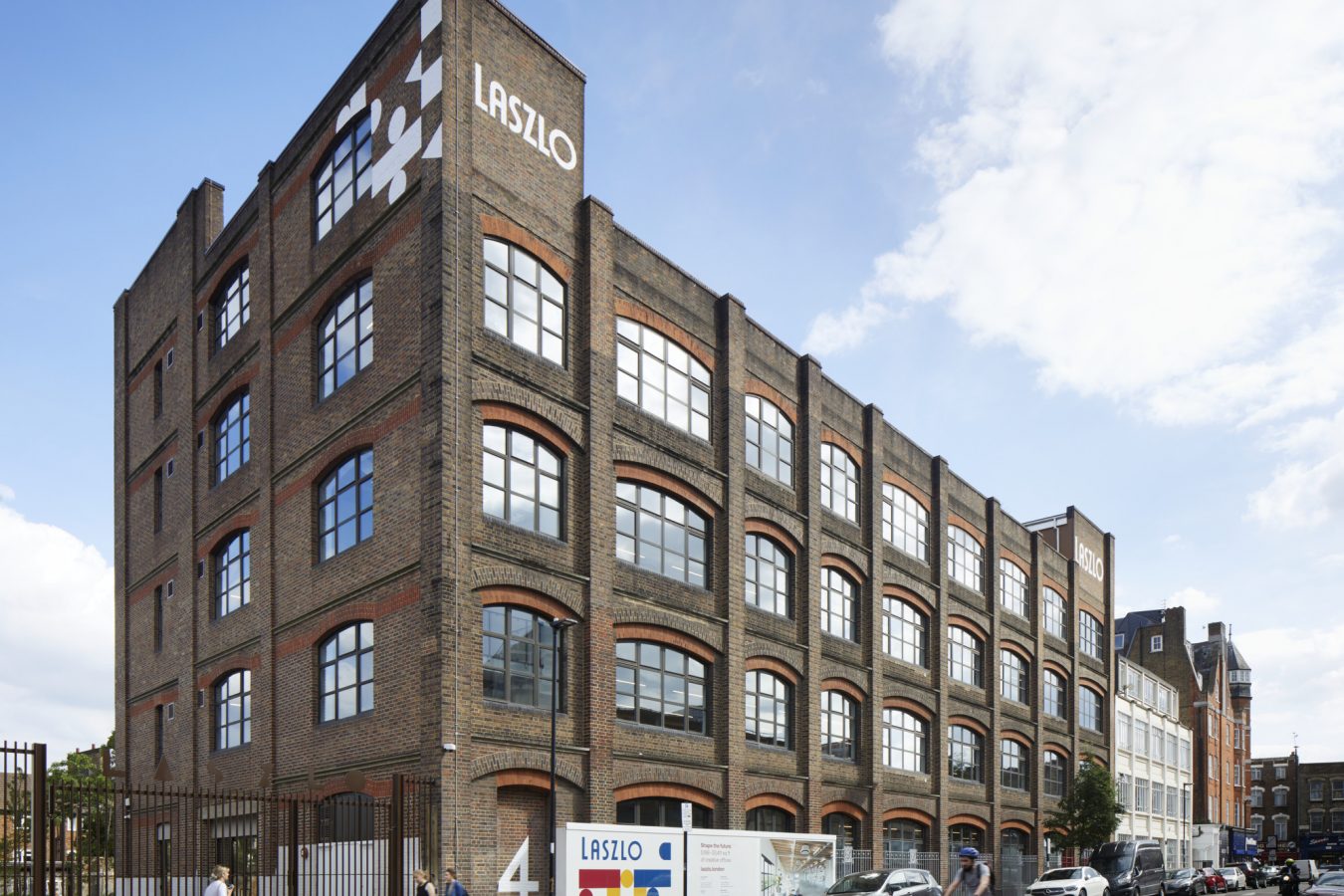 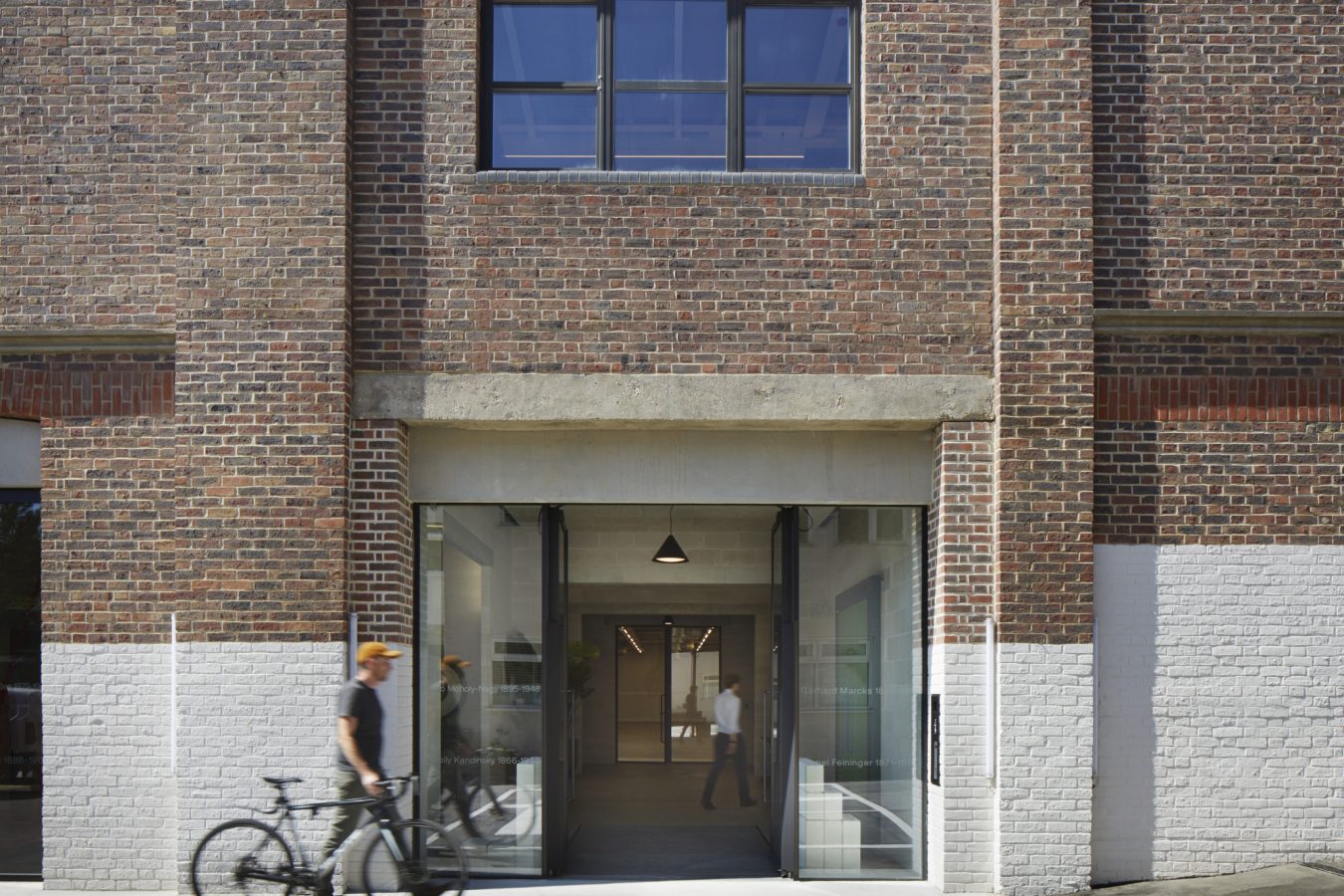 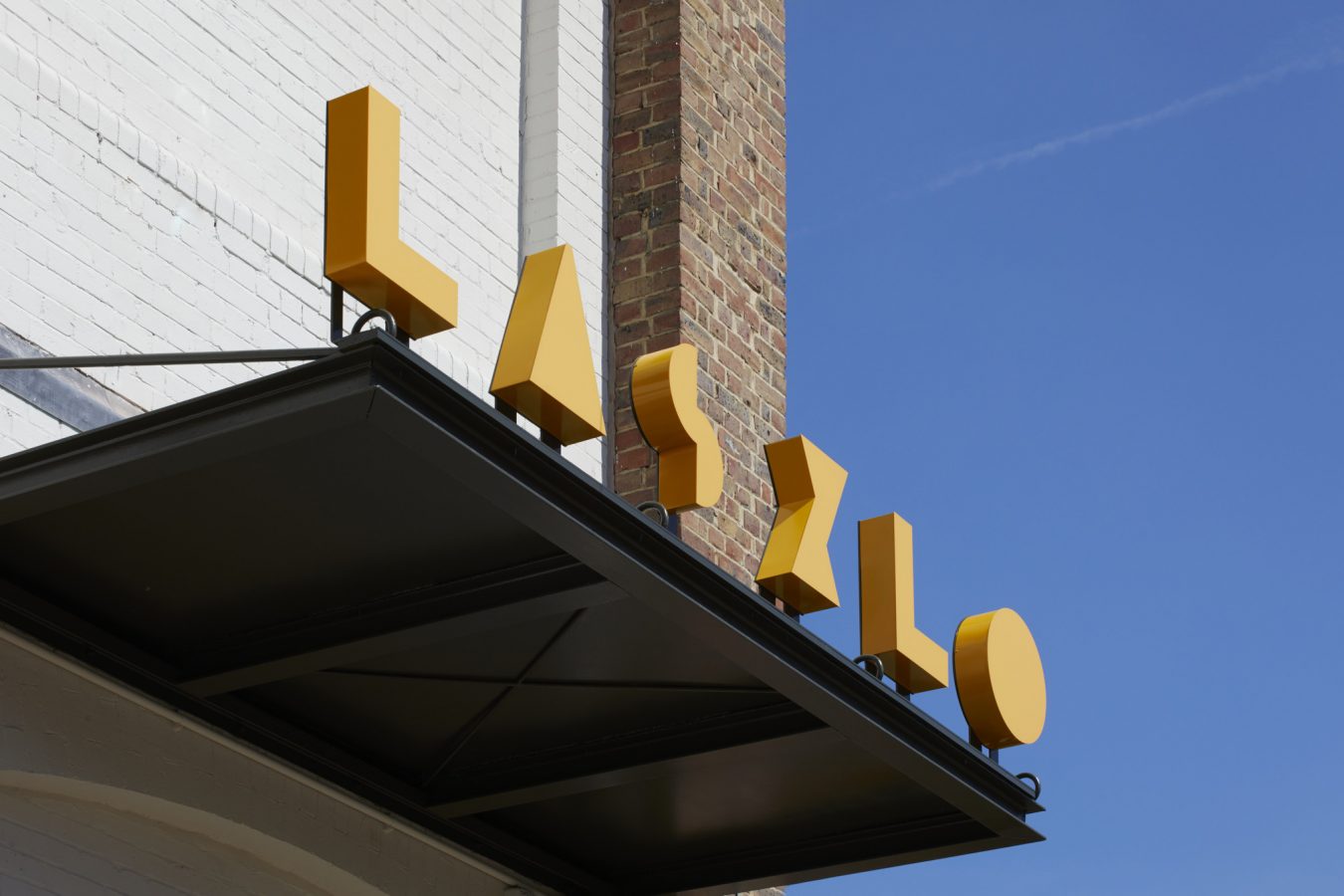 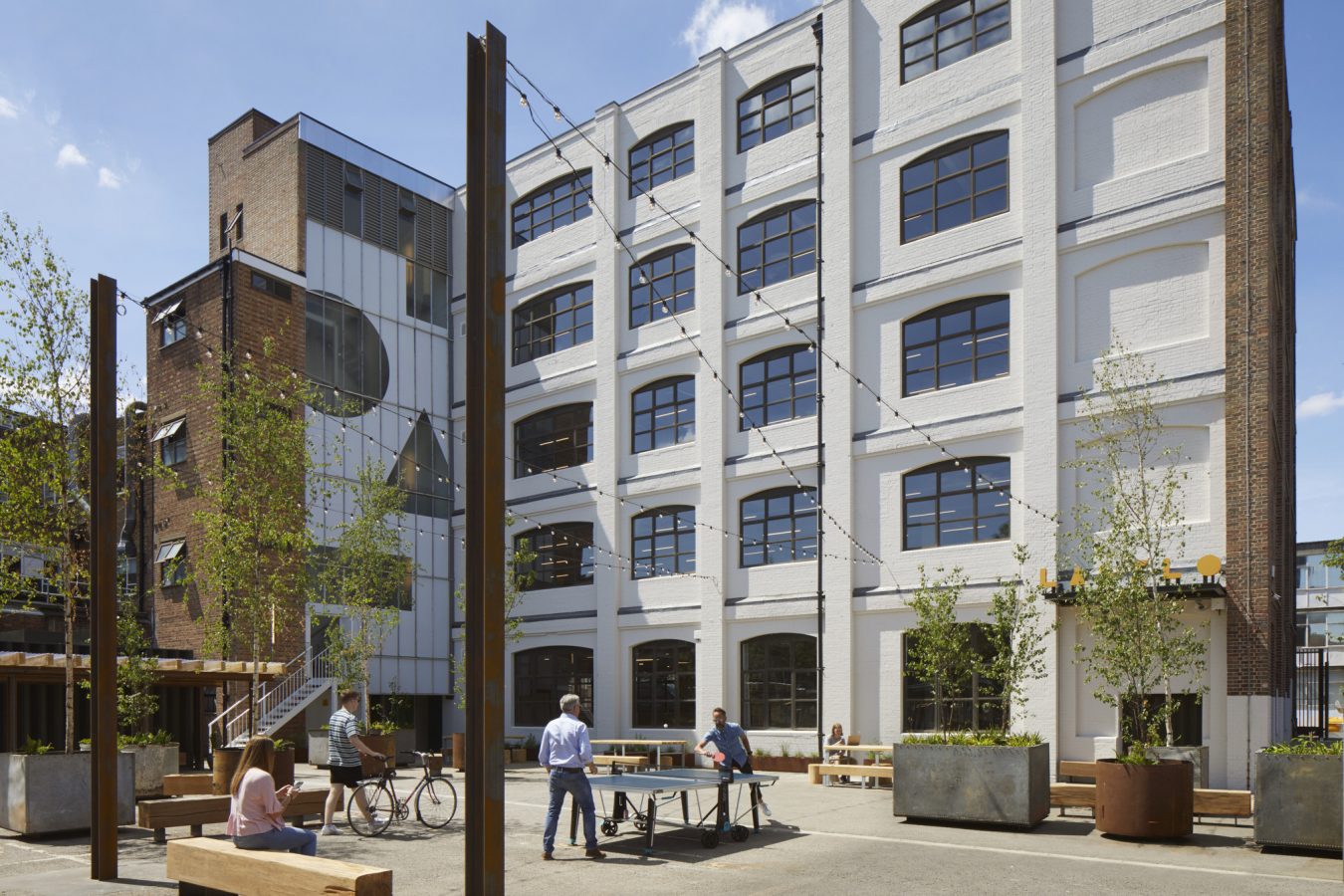 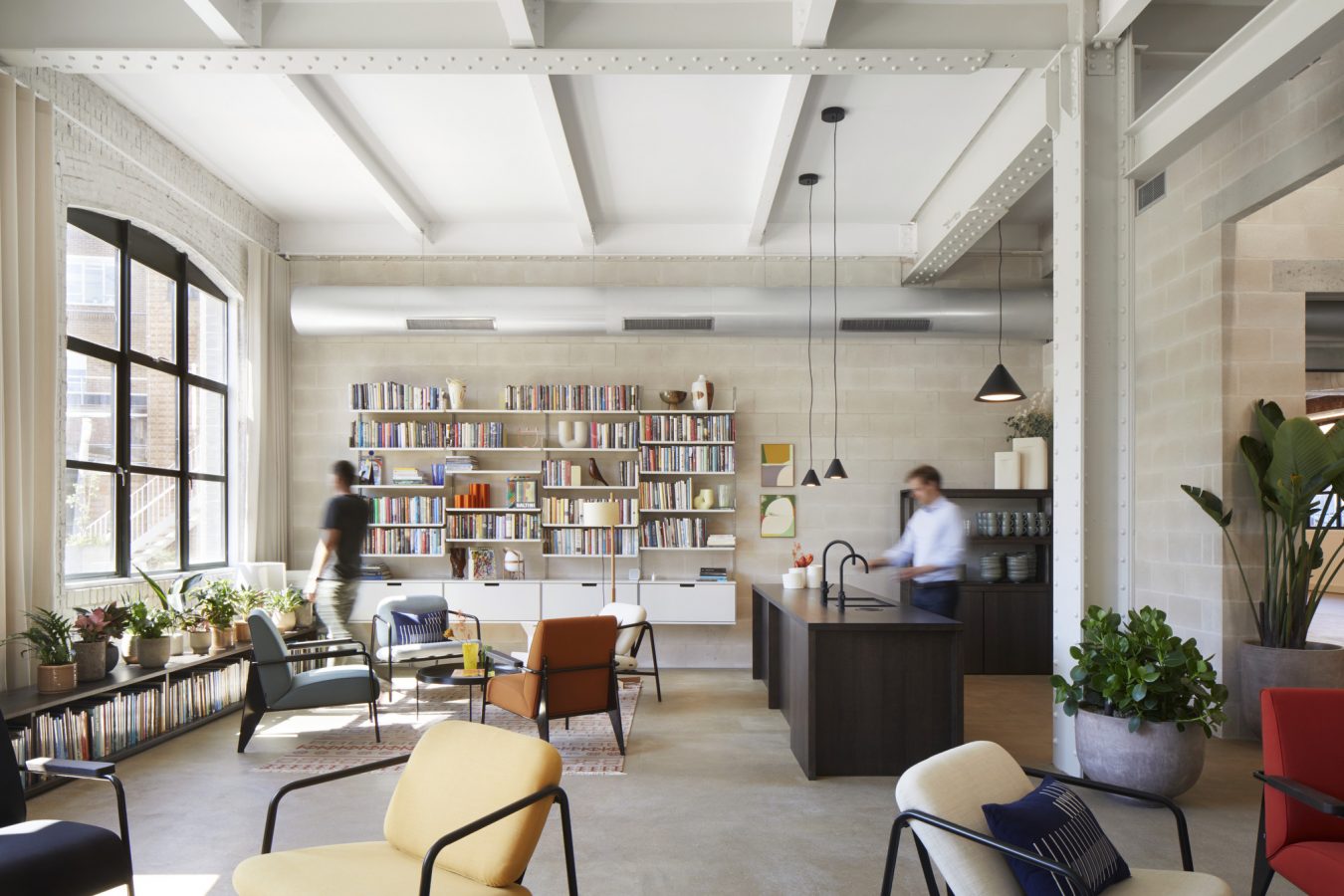 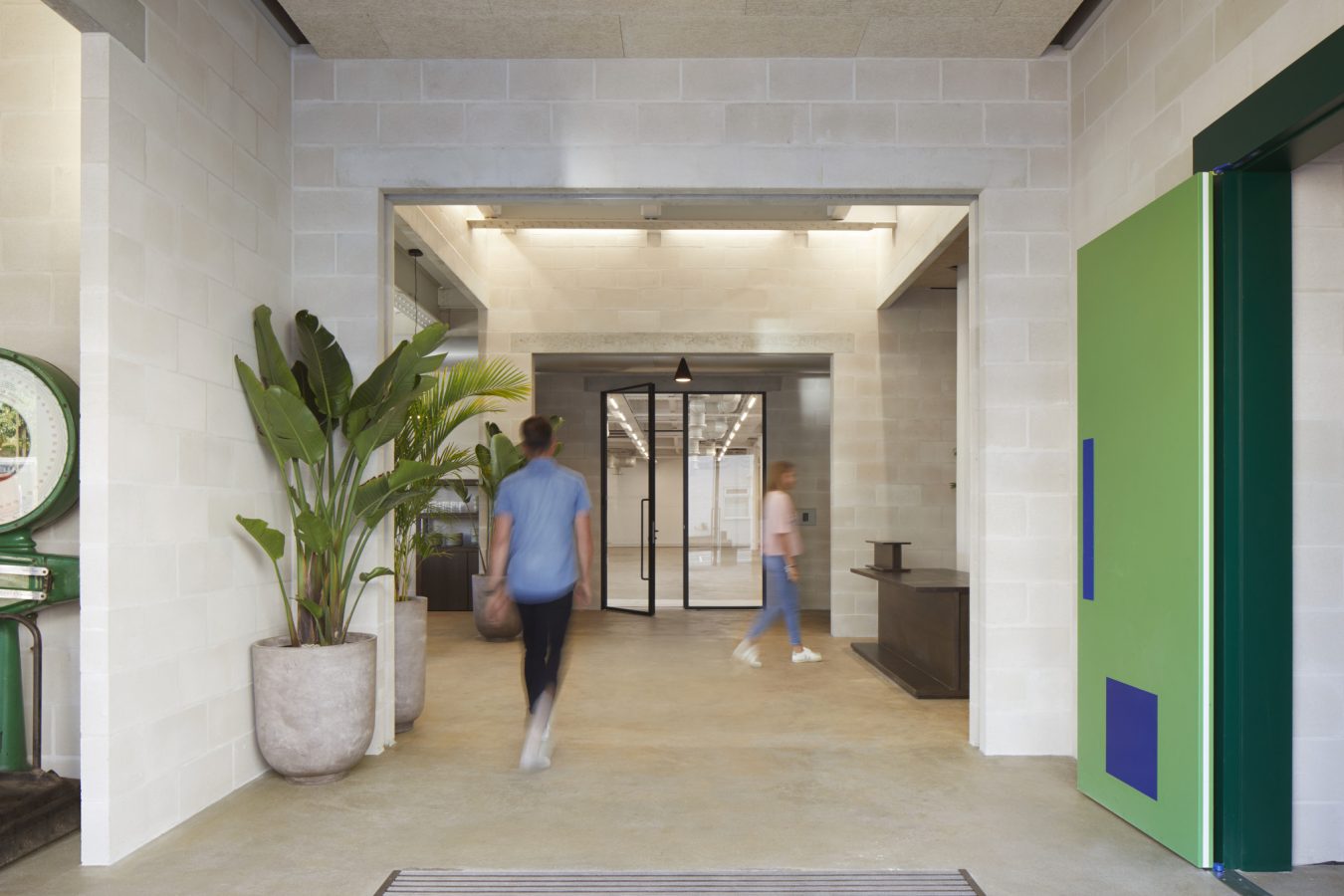 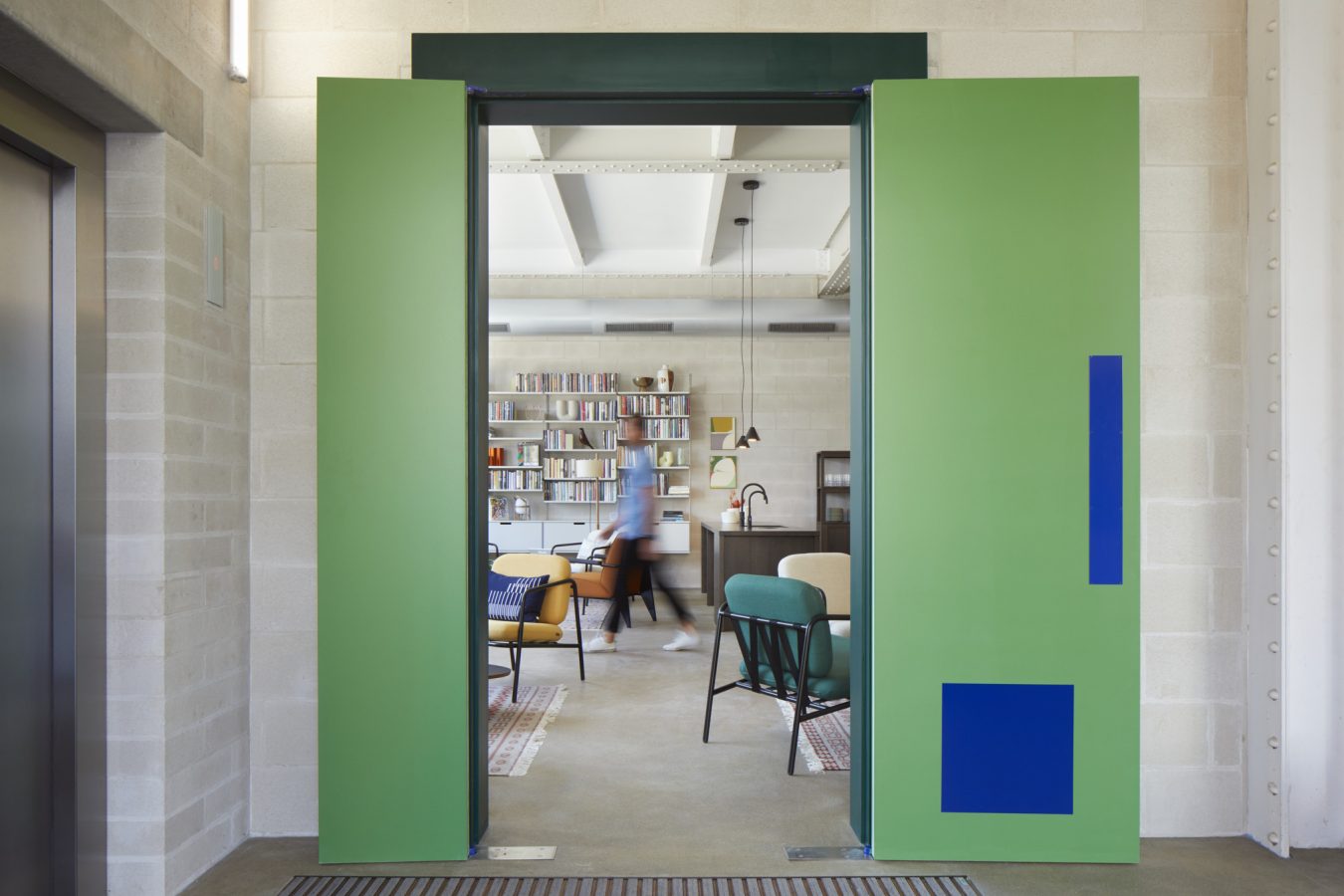 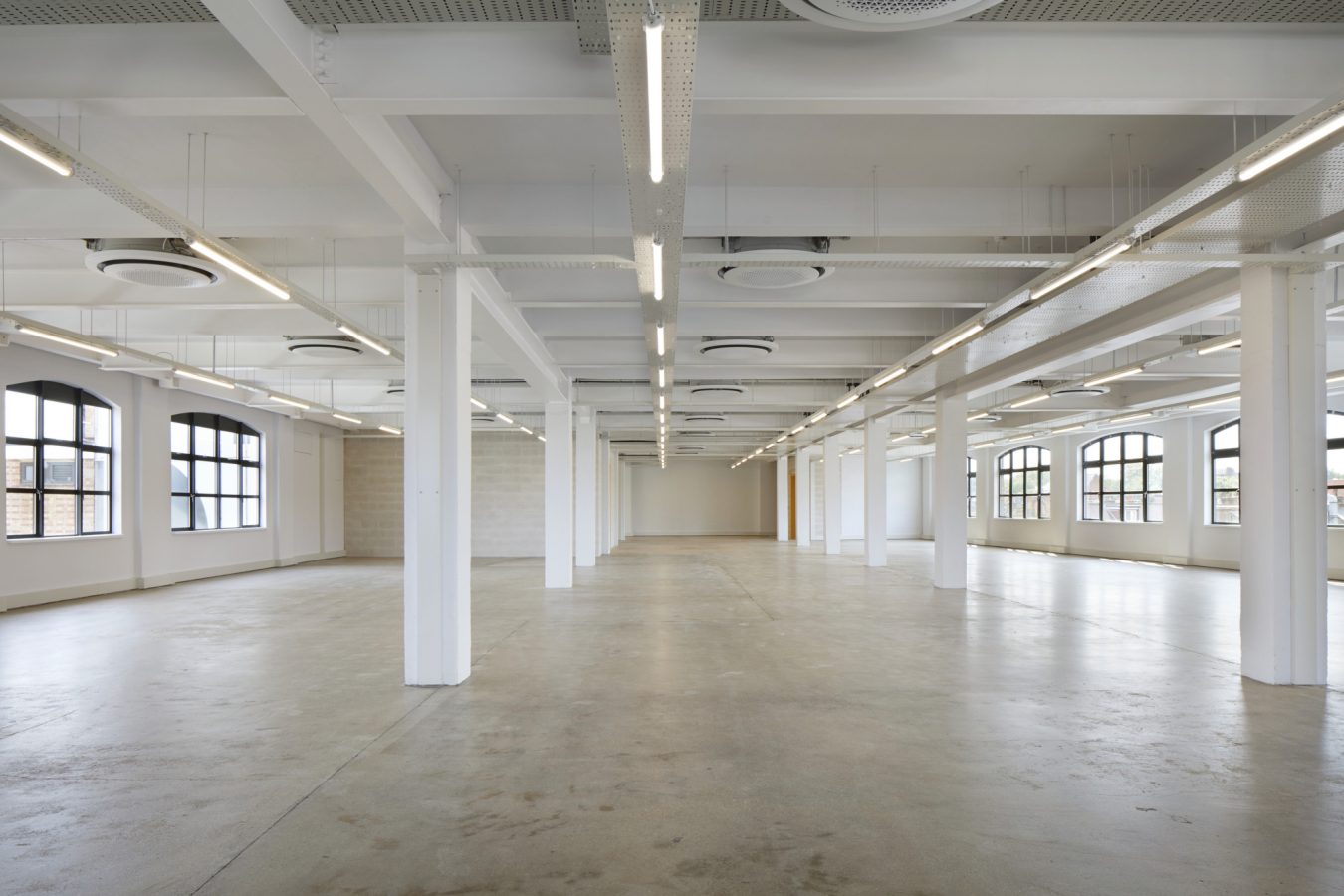 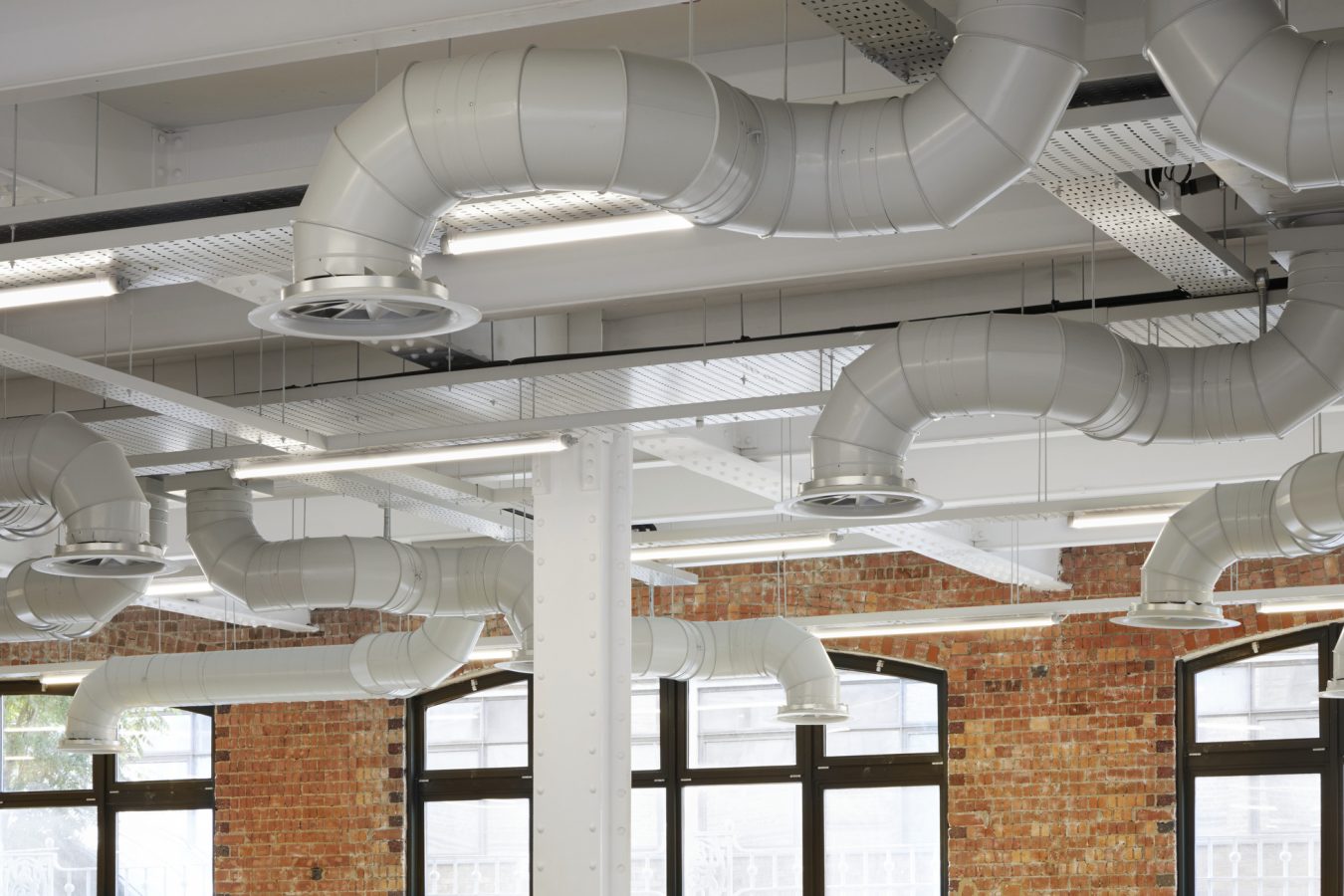 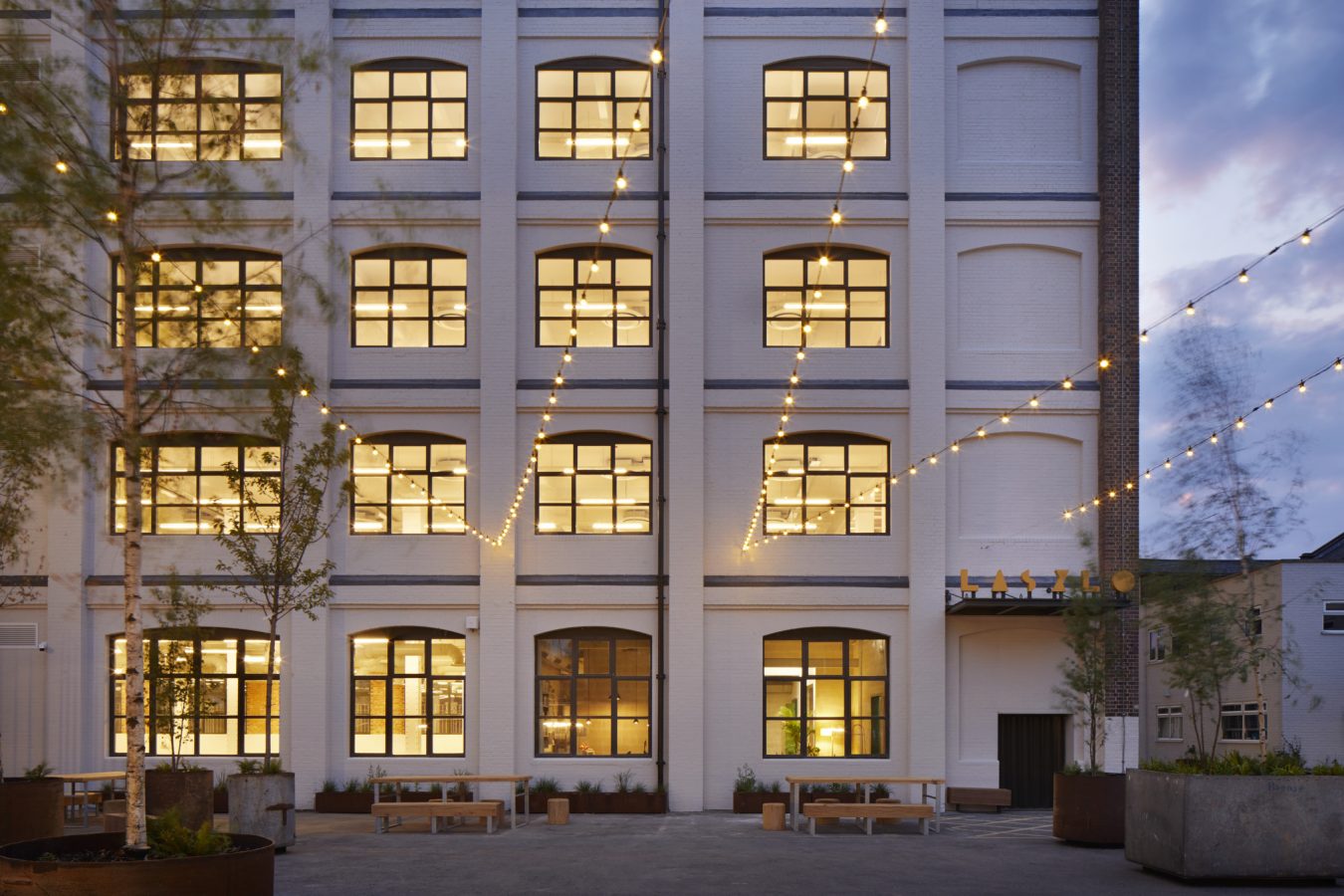 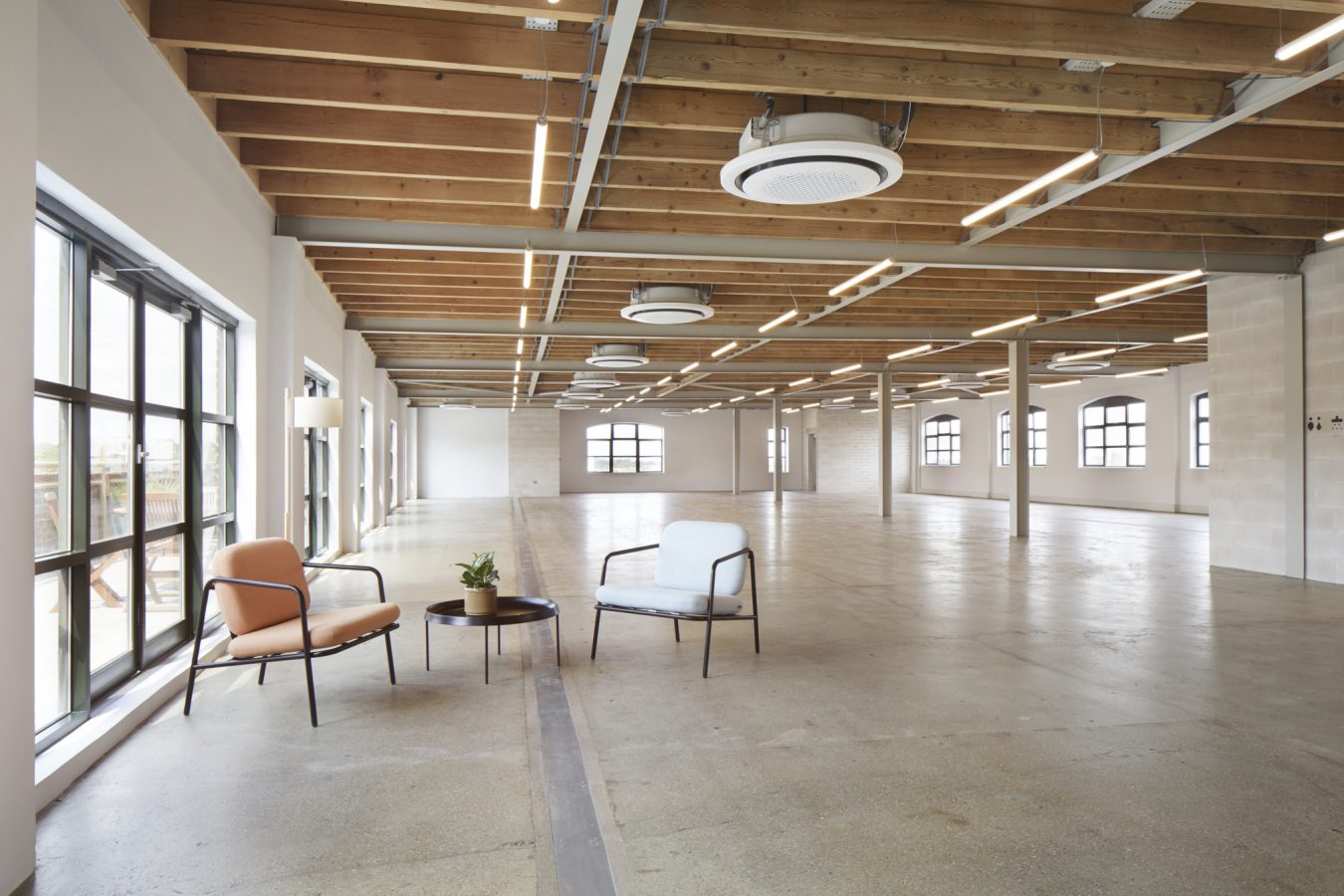 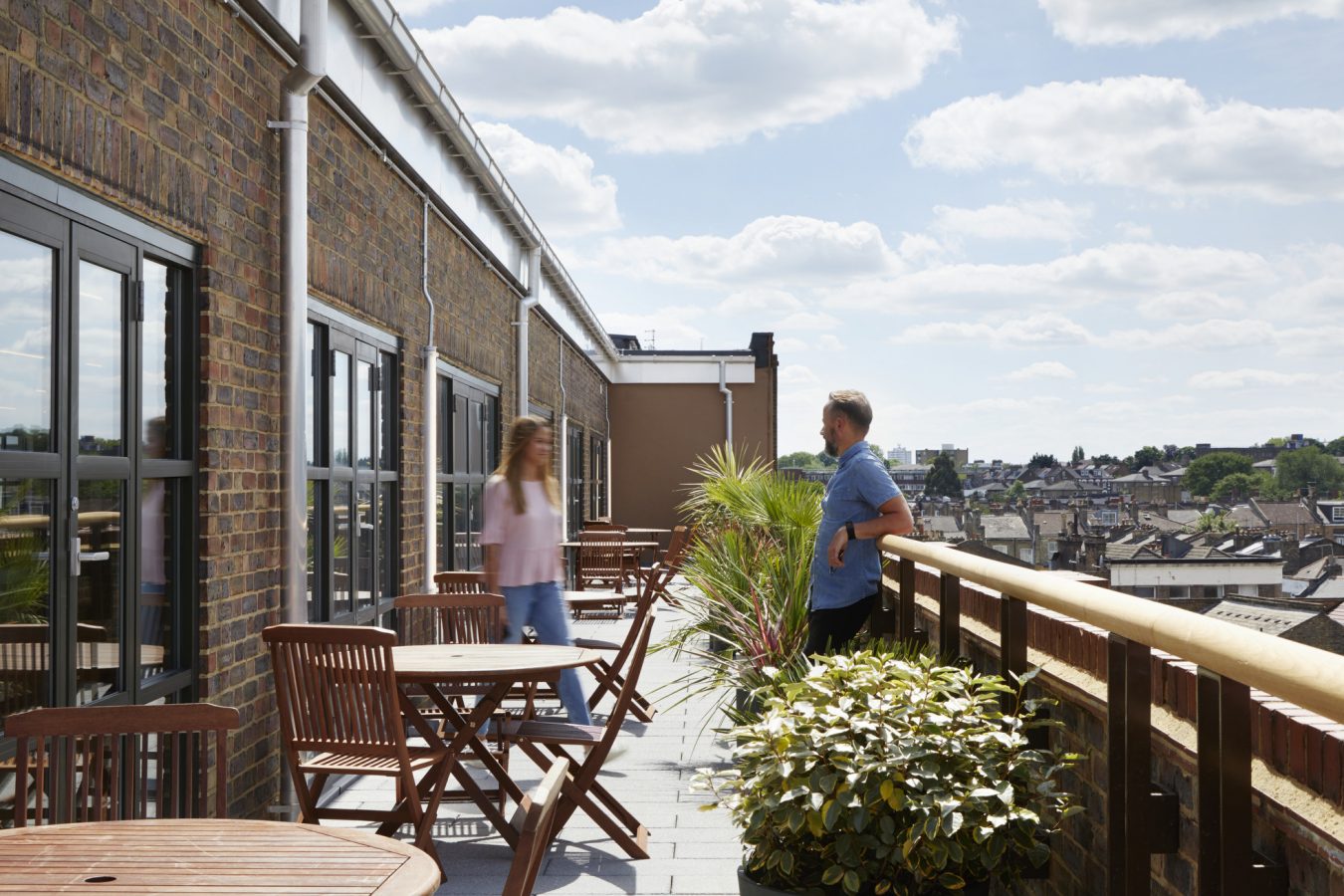 ​The washrooms and showers facilities were created out of concrete blocks and decorated with bespoke joinery, integrated mirrors, new lighting, sanitary ware and fittings throughout, on all four floors. ​​We also built a new layout on the ground floor for the ‘living room’ and the reception. The spaces were separated by sensor motion glass doors and have a smart cooling air system configurated to start based on the motion of people. ​The upper walls were intentionally left as fair-faced blockwork with light mortar, precast concrete lintels were added to communal stairs, lifts and WCs, while on the ground floor the walls were plastered and decorated with painted brickwork.

While some of our team focused on the internal decorations, the roof works and the courtyard scheme were also worked on in this phase. ​On the roof works started first when our team moved the lifts and had to install a large scaffolding on the roof to make possible the installation of the new lifts. In the second phase, we replaced the dated felt roof with a thermally insulated one to which we added solar panels. ​​The courtyard scheme was envisioned as a ‘back yard’ where people can enjoy the sunshine with a game of table tennis or a cup of coffee in a secure environment. To create this 5188 sq. ft. of relaxing garden area we painted the building exterior brick façade in white, installed benches and brought in established trees and plants.

Together we helped ‘shape the future’​

​At Laszlo, we worked with over 40 subcontractors and suppliers to bring our client’s vision to life. During the refurbishment of Laszlo, 94.4% of waste was recycled and 0% of waste went to landfill, a great achievement for us as main contractors. ​​As a response to the changing workplace environment, we installed smart mechanical systems that enable occupiers and visitors to have a contact-free experience from the entrance at the building gates to their desks and made the two existing staircases into a one-way system. We even installed sensor-controlled WC systems, that flush themselves!​ ​We were proud to be part of an amazing creative team that has ‘shaped the future’ of Archway, starting with this complex refurbishment scheme for Laszlo.​